By Apwu133, December 4, 2019
Greetings to all,
As many of you know I have retired from the USPS effective May 31, 2019. I am still active as a full dues paying and proud member of the Charleston WV Area Local # 133.  I also serve as your Legislative Director and, as such, will attempt to keep you informed of the federal and state legislative issues that affect all of us as postal employees. I have been a bit out of commission since retirement due to health issues but I fully intend to keep the membership informed. That being said, I can print the info here, but as with all things union, I am only one. A reaction to the info is what is needed. I shall attempt to keep Republican vs. Democrat (or vise versa) out of the picture, as neither in my opinion is 100 percent correct. I just ask that you read the info, decide for yourself and react, if you’d like to help further the cause. And, by react I mean call, write, email your representatives. Contact info is at the end of this article. Nothing ventured, nothing gained, squeaky wheel gets the grease and all that. It is my intention that this report will appear quarterly and will contain many issues ranging from the repealing of the pre-funding mandate to lowering prescriptions drug prices for all. Hopefully, something for every employee to take a stand. On that note:
1. House Resolution (H.R.) 2382 USPS Fairness Act, Introduced April 29, 2019 in House of Representatives. Referred to the House Committee on Oversight and Reform on April 29, 2019. Due to the 2006 Postal Accountability and Enhancement Act the USPS has been burdened with pre-funding its retiree healthcare benefits 75 years in advance. No other company does this and it is the reason the USPS almost always operates in the red. By repealing the refunding mandate, the Postal Service would then be able to focus on investing and innovating services in order to better meet its mission to service every American household and business. H.R. 2382 has achieved a bi-partisan majority of co-sponsors. With new House rules, legislation that reaches 290 or more co-sponsors can be scheduled directly for a floor vote. Currently there are 294 co-sponsors.  David McKinley from District 1 of WV and Harold Rogers from District 5 of KY has signed as co-sponsors of the bill. Alex Mooney and Carol Miller of WV have not, nor has David Massie of District 4 in KY.
2. On May 2, Rep. Derek Kilmer (D-WA-06) and Rep. Tom Cole (R-OK-04) introduced the Federal Retirement Fairness Act. H.R. 2478 would allow postal and federal employees who moved from a temporary (PSE) to a career position to “buy back time” towards their retirement. The time worked as a PSE would count toward their retirement. This would affect more than 60,000 APWU members who have converted from temporary to career positions.
3.  H.R. 2517, The USPS Shipping Equity Act. Private carriers, such as UPS and FedEx, are already able to ship beer, alcohol and wine direct to consumers. In 2018, private carriers reported a revenue of over $3 billion form delivering for wineries, breweries, and other producers. Due to outdated Prohibition Era regulations, it is currently illegal for the USPS to ship these products. Realizing this missed opportunity to increase revenue, Rep. Jackie Speier (D-CA-14), along with 12 co-sponsors, introduced the Act. Under bipartisan legislation the prohibition of the USPS shipping alcohol would be fully removed, while setting up regulations which would include:
Shippers must register with the Department of Treasury, the federal regulator of alcohol;
Recipients must be 21 or older, with valid government-issued ID shown at time of delivery; and,
Shipments can only go to consumers - deliveries cannot be for resale or commercial.
Additionally, the USPS must comply with state and local laws in force at the point of delivery.
As the Postal Service looks for innovation and how to diversify provided services, the delivery of wine, beer, and spirits is an obvious solution that would bring in millions of dollars.
Additionally, the Postal Service can reach more customers than its private counterparts. The USPS delivers to every address, regardless of geographic location. With this bill, even those in rural areas will have access to direct-to-consumer shipping of beer and wine, who would otherwise see exorbitant shipping fees or no shipping options at all. Not only does this legislation level the playing field between the Postal Service and private carriers, but it also provides equal access to all customers.
4.  APWU calls on Congress pass comprehensive Postal Reform legislation and to support H.Res.60, H.Res.23 and H.Res.54. Briefly, House Resolution 60 (Sponsor: Rep. David McKinley WV-1) calls to restore service standards that were in effect as of July 1, 2012. House Resolution 23 (Sponsor: Susan Davis CA-53) calls for the continuation of door delivery for all business and residential customers. House Resolution 54 (Sponsor: Rep. Gerry Connally VA-11) calls for the continuation of the 6-day mail service delivery.
These are but a few of the issues facing the American Postal Worker. I urge you to contact your representatives in the House and Senate to let them know where you stand on these issues. We must be active. Contact info follows:
WV Senate, https://contactsenators.com/west-virginia
Joe Manchin III
306 Hart Senate Office Bldg
Washington DC 20510
Ph. 202.224.3954
Shelley Moore Capito
172 Russell Senate Office Bldg
Washington DC 20510
Ph: 202.224.6472
WV House of Representatives, https://www.house.gov
District 1
David B. McKinley
2239 Rayburn HOB
Washington DC 20515
Ph: 202.225-4172
District 2
Alex X. Mooney
2440 Rayburn House Office Bldg
Washington DC 20515
PH; 202.225.2711
District 3
Carol Miller
1605 Longworth HOB
Washington DC 2015
Ph: 202.225.3452
KY Senate, https://contactsenators.com/kentucky
Mitch McConnell
317 Russell Senate Office Bldg
Washington DC 20510
Ph: 202.224.2541
Rand Paul
167 Russell Senate Office Bldg
Washington DC 20510
Ph: 202.224.4343
KY House of Representatives, https://www.house.gov
District 4
Thomas Massie
2453 Rayburn HOB
Washington DC 20515
Ph: 202.225.3465
District 5
Harold Rogers
2406 Rayburn House Office Bldg.
Washington DC 20515
Ph: 202.225.4601
I sincerely wish each of you Merry Christmas and a Happy New Year. God Bless.
Glenn R Wilson
Legislative Director,
Charleston WV Area Local # 133

On Thursday, Oct. 31 the APWU conducted the installation of the newly elected national officers with a message of unity and determination to fight for the future of postal workers and working people everywhere.

The night’s theme was “Moving Forward Together” and the ceremony was presided over by APWU Secretary Treasurer Elizabeth “Liz” Powell.

The guest of honor at the ceremony was AFL-CIO Executive Vice President Tefere Gebre who administered the oath of office.

After an introduction by Executive Vice-President Debby Szeredy, Gebre addressed the gathering, praising the work of APWU’s officers and leadership, “Your union, led by your president, Mark Dimondstein, has been a leader in our movement with the creation of a A Grand Alliance to Save our Public Postal Service, the successful fight to Stop Staples, the campaign to expand the role of the Postal Service, including vote by mail and postal banking -- Fighting to defend the common good, public services and public sector unionism.”

He spoke of the fight during the tough times we face, with working people experiencing cruel and unnecessary hardships with low wages, unsafe workplaces, voter suppression, families ripped apart and refugees turned away.

But he expressed his hope in the face of this adversity:

“…Hope in each of you...serving your communities. Hope in striking teachers. Hope in the 60 million Americans who would join a union today if they could. Hope of a brighter day,” he said.

APWU President Mark Dimondstein gave the keynote speech, congratulating all who were elected and thanking the outgoing officers for their contributions and dedication to the APWU and postal workers. With the union election over he pointed out that, “Now principled unity is key, as we battle corporate greed, Wall Street privatizers, a hostile political environment, and those in management who are undermining the Postal Service.”

After summarizing our substantial progress over the last six years, Dimondstein raised, “But we cannot rest. We are working, living and struggling when there is an all-out war on workers, our families, communities and our organizations. It is Them vs Us, Wall St. vs. Main St., Capital vs. Labor,” he said.

He set out some of the priorities for the coming years: “We will complete the ongoing interest arbitration for a new and good union contract… We will bolster our efforts for new opportunities for postal services, revenue and jobs, including expanding financial services and vote by mail....We will advance the ongoing efforts to gain postal legislation that strengthens the public Postal Service.”

“A new broad union education program is already in the works,” he said and advocated that, “Our Stand Up for Safe Jobs campaign needs deeper roots among the members. And together we must find ways to improve staffing of facilities and address the ever-increasing hostile work environments.”

Most importantly, Dimondstein raised, “The paramount job security battle of our time is to ensure the public Postal Service remains just that. Our jobs, our union and the people’s democratic right enshrined in the Constitution depend on our determination and success. Since the White House plans for full-blown postal privatization emerged, the APWU has mobilized all hands-on deck. With a soon to be new Postmaster General chosen by the Trump-controlled Postal Board of Governors, this critical battle will greatly intensify.”

He ended with the call to action, “…We must carry on the crusade to save the public Postal Service and our collective bargaining rights and to take on corporate Wall Street power with more workers’ power! Let’s continue to stand up and fight back, hand in hand with each other, all crafts, active, retiree and auxiliary members, postal and other unions, community allies and the people who support the public post office and trust postal workers.” 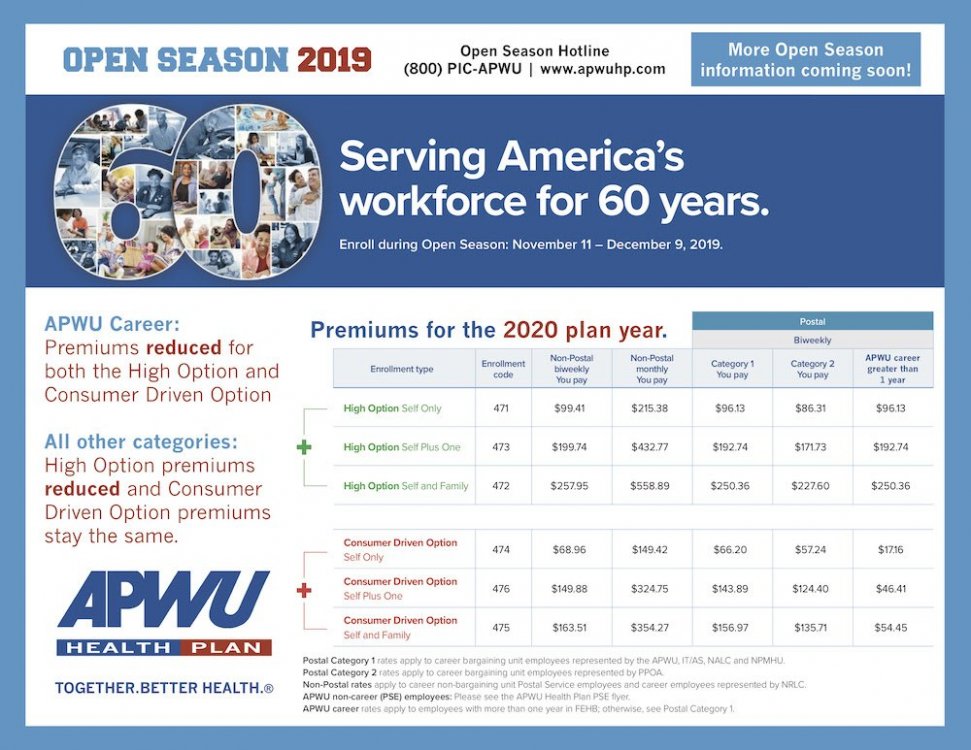 Portal by DevFuse · Based on IP.Board Portal by IPS
×
×